Skip to content
Fine art giclée prints from watercolors & acrylics, with a focus on ocean and island life.

All artwork, text and images are copyright © 2000-2016 Margy Gates. All Rights Reserved.

Sunday September 20th was a great night at the Waterside Restaurant in Channel Islands Harbor, CA, as we shared great food and listened to Kelly’s Lot play great music, and had a chance to bid on some great things in the Silent Auction, all to bring awareness to FTD — Frontal Temporal Dementia. Margy donated a stunning original piece that had been held in her private collection for almost 20 years, Alison’s Reef II, which went in the silent auction for $2000 to help raise money for FTD. In all, the evening brought in over $7000 for the cause, and we are so glad Karine Adalian, who hosted the event and will host others in years to come (and whose sister has been afflicted with this diabolical disease) had such a good turnout and support from friends and neighbors in the area. 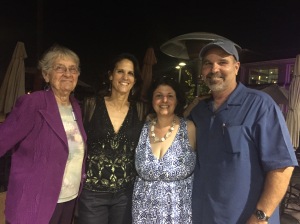 So, onward and upward: the move to close Sea Gate Art Gallery & Studio in Hollywood-by-the-Sea, CA (also known as Hollywood Beach) continues, and the doors and creaky gates should close for the last time at the end of October 2015. Meanwhile, Margy is still selling original art, giclee prints, ceramics, shells, bits of jewelry and other stuff until the very end, and should be in evidence Thursdays – Saturdays from about 12:30 – 6:30, so stop by and wish her well, buy something, or just hang out.